Fred is revisiting the role of Pontius Pilate in this amazing Production of Jesus Christ Superstar at Dalhalla Amphitheatre in Sweden.

Fred revisits the role as The Beast in this fabulous production at the Malmö Opera House, Sep 2019-April 2020

Fred plays one of Disneys most famous villians

Phantom of the Opera

Fred plays the title role of the Phantom at the Gothenburg Opera House, Sep 2017-June 2018

Sunset Boulevard ENO at London Coliseum Michael Xavier, Siobhan Dillon and Fred Johanson will join Glenn Close in Sunset Boulevard, the second production in the partnership between English National Opera (ENO) and the GradeLinnit Company. With music by Andrew Lloyd Webber and book and lyrics by Don Black and Christopher Hampton, Sunset Boulevard is produced by arrangement with The Really Useful Group Ltd and is based on the original Paramount film by Billy Wilder.

Lonny Price will direct the strictly limited run of 43 performances at ENO’s London Coliseum which begins on 1 April 2016 with press night on 4 April 2016 at 7.30pm and will have its final performance on 7 May 2016. The full ENO orchestra will appear on stage alongside the cast in this semi-staged production. Orchestrations are by David Cullen and Andrew Lloyd Webber with choreography by Stephen Mear, set designs by James Noone, costume designs by Tracy Christensen, Glenn Close’s costumes designs by Anthony Powell, sound by Mick Potter and lighting by Mark Henderson. Musical Director is Michael Reed who also conducts.

In her mansion on Sunset Boulevard, faded, silent-screen goddess, Norma Desmond, lives in a fantasy world. Impoverished screen writer, Joe Gillis, on the run from debt collectors, stumbles into her reclusive world. Persuaded to work on Norma’s ‘masterpiece’, a film script that she believes will put her back in front of the cameras, he is seduced by her and her luxurious life-style. Joe becomes entrapped in a claustrophobic world until his love for another woman leads him to try and break free with dramatic consequences.

Glenn Close, making her West End debut as well as her first reprisal of the role for UK audiences, plays faded silent movie star Norma Desmond, for which she has previously won a Tony Award, a Drama Desk Award, a Los Angeles Drama Critics Circle Award and a Dramalogue Award for the Broadway production directed by Trevor Nunn.

Michael Xavier (Joe Gillis) is currently playing the role of Gaylord Ravenal in the critically acclaimed musical Show Boat at the Sheffield Crucible. His other theatre credits include Suffolk/ George of Clarence in Sir Trevor Nunn’s production of The Wars Of The Roses at The Rose Theatre, Emmanuel Schikaneder in Emmanuel and Eleonore (workshop) directed by Sir Trevor Nunn and composed by Stephen Schwartz, John Wilkes Booth in Assassins at the Menier Chocolate Factory, Sid Sorokin in The Pajama Game at the Shaftesbury Theatre, Captain Von Trapp in the Sound of Music at the Regent’s Park Open Air Theatre, Cornelius Hakl in Hello Dolly at the Leicester Curve Theatre, Oliver in Love Story at The Duchess Theatre (Olivier Nomination-Best Actor in a Musical), Wolf/Cinderella’s Prince in Into The Woods at Regent’s Park Open Air Theatre (Olivier Nomination-Best Supporting Performance in a Musical), Curly in Oklahoma! at the Chichester Festival Theatre, Sir Galahad in Spamalot at The Palace Theatre, Raoul in The Phantom of the Opera at Her Majesty’s Theatre, Bob Baker in Wonderful Town for the Royal Exchange Theatre, James Prince in Soho Cinders, Sky in Mamma Mia and Freddy in My Fair Lady. His television and film credits include Tom in Never Let Go (Latitude Films), Rob in Gnomeland (Short) and The Muppets..Again! (Disney). Michael has also hosted the UK Theatre Awards, West End Live and the Olivier Awards at the Piazza.

Fred Johanson (Max Von Mayerling) has starred in several major musicals in both his native Sweden as well as the West End including Peron in Evita, Javert in Les Miserables, Old Deuteronomy in Cats, Reverend Shaw in Footloose, The Beast in Disney’s Beauty and the Beast, Louis B. Meyer in Garbo, Frollo in Notre Dame de Paris as well as Max in Sunset Boulevard at the Gothenburg Opera. He played Pontius Pilate in Jesus Christ Superstar both on stage and in the 2001 film version and as a soloist he has performed at the Royal Albert Hall, the National Concert Hall Dublin, the Berwaldhallen and the Stockholm Concert Hall. He has released two solo albums and reached number one in the Australian charts with the group Scandal’us, achieving double platinum status. He has also written songs for ABBA’s Annifrid Lyngstad. 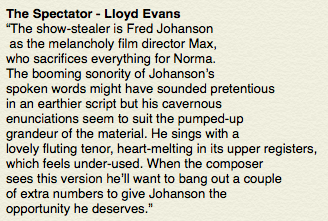